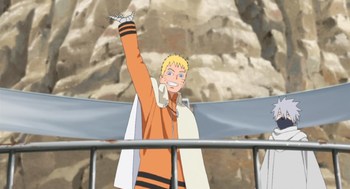 The Day Naruto Became Hokage is a one-shot sidestory to Naruto written and drawn by the series' creator Masashi Kishimoto, released in the Zai no Sho guidebook in August of 2015. It was later adapted as an OVA released in July of 2016 alongside the Boruto: Naruto the Movie DVD, and again as part of Boruto: Naruto Next Generations' 18th episode.

It's the morning of Naruto's Hokage inauguration, but he is still asleep. Hinata asks Boruto and Himawari to go wake him, and when Himawari's "cutesy" way fails, Boruto jumps on him. At the breakfast table, Hinata says she will go pick up his cloak before the ceremony in case it's not finished. Naruto remembers when Kakashi's cloak was not finished in time. Hinata instructs Naruto to go to the venue with the kids quickly while she picks up the cloak.

Upon arriving and finding that Naruto has not arrived, Hinata rushes home. Naruto is ready to go but Boruto and Himawari fight over a stuffed panda that Himawari wants to bring with her but Boruto says it will embarrass him in front of the villagers. As they have a tug-of-war over it, the panda rips in half. Angry, Himawari awakens the Byakugan and attacks a terrified Boruto. Confused and alarmed, Naruto tries to stop the fight by saying they needed to stop it but is struck by Himawari's finger in the abdomen, and even causes Kurama to react painfully, and knocks Naruto unconscious.

At the ceremony, Sarada is in the audience with her mother and friends, and meets with Chōchō, who hopes the event will be over soon. Sarada silently wonders what's taking the Hokage so long to appear. Kakashi tells Shikamaru that they can't wait any longer and decide to have Konohamaru impersonate as Naruto. As the inauguration begins, Sakura voices her pride for Naruto achieving his dream while Iruka says Naruto will be facing some hard times ahead. At the Uzumaki residence, Hinata finds Naruto unconscious due to all of his chakra points being hit, which will leave him out cold for the rest of the day, and wonders who could have done such a thing. Boruto is hiding in a closet from his sister, who enters the room with a homicidal look in her eyes and asking if he is playing hide-and-seek with her. When it seems that Himawari has found him, Boruto lets out a fearful scream.