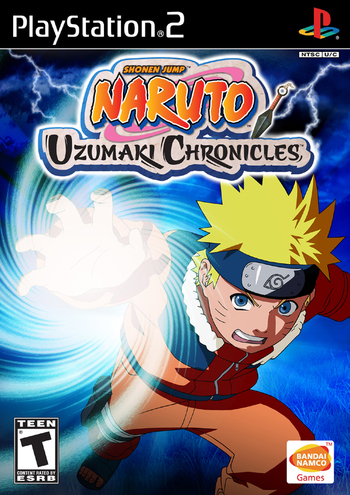 Naruto: Uzumaki Chronicles is a PlayStation 2 Action-Adventure game developed by Cavia and Namco Bandai, based on the Naruto franchise. It is set after the Search for Tsunade arc of the manga and anime, which had not aired in North America at the time the game was released, resulting in Itachi, Kisame, and Tsunade being cut from the English version, Choji's and Gaara's outfits being altered, and the Rasengan being renamed the Power Strike. The game has RPG elements, including a world map and the ability to customize Naruto's abilities.
Advertisement:

The game follows Naruto's day to day life fulfilling various missions for the Hidden Leaf in the wake of a sudden increase in the number of bandits and armed thugs, until a rash of disappearing ninja unveils a sinister plot by Orochimaru to destroy Konoha using an army of undead ninja.

Tropes the game provides include: