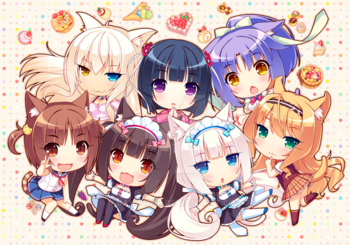 In a world where people often adopt cat girls as pets, Kashou Minaduki tried his best to get away from his at first, along with the rest of his family. Fed up with their demands, he decides to open his own bakery. However, Chocola and Vanilla, his sister's "pets" of sorts, sneak away in his luggage and beg to stay with him, thwarting any plans he had for a peaceful life.

As such, the challenge of opening a successful business with two clumsy, affectionate cat girls constantly running around begins.

Created by Chinese-born artist Sayori (currently living in Japan) under the name NEKO WORKs, NEKOPARA is an eroge visual novel series based on a series of doujinshi also created by NEKO WORKs. Censored versions of Vols. 1, 2, and 3 are available to purchase on Steam, with the 18+ versions (and corresponding Steam patches) being available on dlsite, Denpasoft, and NEKO WORKs' own download site; the 18+ patches were later added on Steam as DLCs after they were allowed by platform policy. Vol. 0 and Extra are available only on Steam in "all-ages" form, and NEKOPALIVE is free-to-play through Steam.

A Kickstarter for an animated OVA adaptation was announced

in December 27th, 2016 and went live two days later. After launch, the kickstarter reached it's $100,000 goal within an hour, and finished a little shy of $1,000,000. A second campaign for those with PayPal and Stripe was launched a few days later, taking the total past that final stretch goal. The OVA was released ahead of schedule on December 21, 2017 due to an accidental early leak to some Kickstarter backers.

that was uploaded on 13 Febuary 2018 revealed that KOTOKO has been roped in to making music for future content. A spin-off TV series was teased in mid-2019, with the first episode premiering

on July 6 at Anime Expo. The complete series aired starting in January 2020. A mobile game titled Nekoparaitennote "Raiten" means the act of visiting a shop is being developed by Yostar.

In 2022, NEKO WORKs announced INUPARA: Dogs Paradise, a game focused on Doggirls was announced as their April Fools' Day joke. However, it was quickly announced that it will be released as a full title and is currently in development and illustrated by Sayori.

The NEKOPARA series provides examples of:

Maple namedrops this trope after Cinnamon rushes inside.

Maple namedrops this trope after Cinnamon rushes inside.