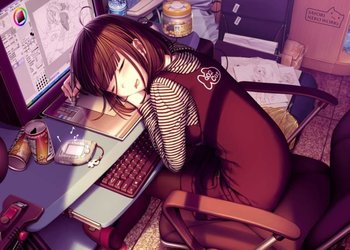 Sayori's Author Avatar, as drawn by herself.

Sayori is a Chinese-born fanartist (currently living in Japan) from the doujin group NEKOWORKs , which consists mostly of just herself, famous for the doujin series Nekopara. Outside of NEKOWORKs, she primarily does doujin artwork for Touhou.

Tropes present in her artwork include: