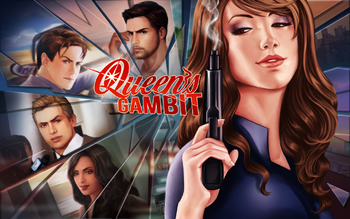 Counter-clockwise from right: Shield, João, Emmett, Tom, Emily.
Queen's Gambit is a Romance Game Visual Novel by Voltage USA for iOS and Android devices. The main character is a superspy with the codename "Shield." She's the consumate professional and at the top of her game, but all of this changes when on her most recent mission, she falls in love. This is made all the more complicated by the fact that her current mission has gone completely off the rails. It's up to Shield to save herself, and everyone else she holds dear while still getting the job done.
Advertisement:

On September 21 2016, Voltage announced that the game would be closing, to be removed from app stores on September 26.