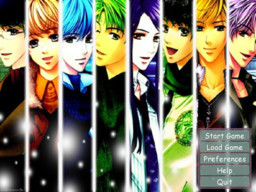 Her name is Donna. Just a normal girl, actually.
Except that... she is the Messiah.
Advertisement:

Twilight Prince's Prophecy Quest Chronicals is an epic Ren'Py-based Otome Game detailing a lone girl's journey into the wilderness of magic, mystery and intrigue, including seeing the Seven Wonders of the World and perhaps finding love. The main plot revolves around saving the world as everyone needs your help, though.