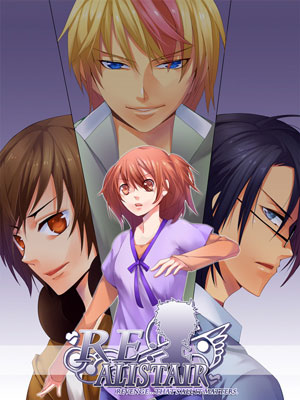 Merui loves nothing more than to play her favorite MMO Rivenwell Online. One day a player named Alistair hijacks Merui's kill in a boss fight and wins the Blessed Stone she aimed to get for herself. Merui, outraged by this, is determined to do whatever it takes to get it back (and to teach Alistair a lesson). This results in a bet initiated by Alistair:

Merui has a month to figure out his real life identity. If she does he'll hand over the Blessed Stone to her. If not, she'll have to relinquish her online earnings from the past month to Alistair.

With a lead and three potential suspects the player must guide Merui in this mystery. Along the way she may very well develop a romance with any of the three guys she's out to investigate...

RE: Alistair is a freeware Ren'Py-based English-language Visual Novel created by sakevisual with writer sake-bento, artist tooaya and programmer Thee Forbidden One. As a Romance Game its primary focus is on forming relationships, with the mystery being secondary.

The creators put out an updated re-release: RE: Alistair++. It can be downloaded from the creator's website

. The game received a Spiritual Successor in Backstage Pass.