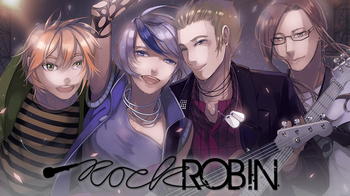 From left to right, Emmitt, Robin, Dallas and Beau
Advertisement:

Kicked out by her old band, Robin vows to create her own. Rock Robin is a mixture of band management sim and dating game. Play as a rockstar girl, raise your band, release albums and fall in love!

The beta can be found here[1]