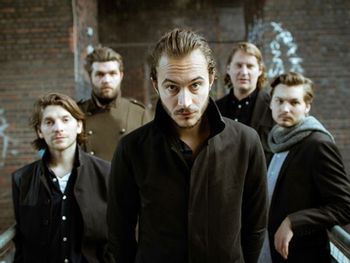 Editors are an English rock band, formed in 2002 by lead singer Tom Smith. Their line-up currently consists of Smith on vocals, Justin Lockey on lead guitar, Elliott Williams on keyboard and rhythm guitar, Russell Leetch on bass and Edward Lay on drums. Former lead guitarist Chris Urbanowicz left the band after the release of their third album, 2009's In This Light and on This Evening, due to creative differences. Earlier on, their original drummer, Geraint Owen, left while the band was still known as The Pride. Before their current name, they've also been known as Pilot and Snowfield.

Their main musical influences include Joy Division, Echo & the Bunnymen, R.E.M., Elbow, The Strokes and The Walkmen. They have been most often compared to the American indie rock band Interpol, due to their similar sound, influences and vocal styles. The sound on their first album, 2005's The Back Room, has best been described as "dark disco" by a reviewer for NME, due to the album's combination of dance-like drum patterns, various synths and catchy guitar licks. They would continue to expand on this sound with their 2007 follow-up, An End Has a Start, creating a "bigger" sound through the method of adding more layers and textures to the songs.

The band would go on to release In This Light and On This Evening in 2009, in which the band switched out their original post-punk-meets-disco sound for a "new, rawer sound" closer to New Wave Music. Four years later, the band released their first album without Chris Urbanowicz, 2013's The Weight of Your Love, where the band would make a slight return to doing post-punk whilst still excluding the disco elements, in addition to Tom Smith singing the tracks in a higher tenor range rather than a baritone one. In Dream returns to the more electronic-heavy sound of In This Light and On This Evening, but brings more guitars into the mix than that album did.

Two of the band's several albums have gone platinum, with all four accumulating several million in combined sales. Two singles off The Back Room ("Munich" and "Blood") became major hits and the album itself received a Mercury Prize nomination. An End Has a Start and In This Light and on This Evening have both reached #1 on the UK Album charts, with the former earned the band a Brit Awards nomination for Best British Band. In addition to strong chart success, the band has managed to sell out all their tours in the past and have headlined numerous festivals, even touring with Muse at one point.

Open your arms and welcome tropes into your town: