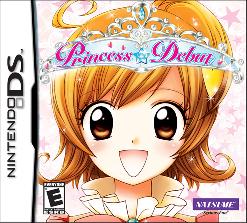 What's a girl to do? You've been taken to an alternate dimension by your possible identical twin, you have thirty days to learn how to do ballroom dances by taking lessons from an anthropomorphic rabbit, at least five or six Bishōnen princes are in love with you (maybe), and a pink-haired girl wants to ruin your life. Oh, and you have a flying hamster.

Princess Debut, known in Japan as Ohimesama Debut, is a Dating Sim developed by CAVE (yes, one of your typical Bullet Hell developers) for the Nintendo DS, and released in English by Natsume, the same guys who brought Harvest Moon to the shores of North America. Its target audience is pre-teen girls, but it can still be enjoyed by an older audience.

In summary, you discover that your character (whose default name is Sabrina) has an "other self" in a parallel world who just happens to be a princess... and also happens to stink at dancing. Unfortunately for her, there's a huge ball in about thirty days. You agree to switch places with her and learn how to dance so she won't be embarrassed at the ball.

Congratulations! Now choose from the following princes: Vince, Cesar, Kiefer, Liam, Luciano, or Klaus. Alternatively, you can just reject everyone and end up someone else.

Aside from being a Dating Sim, Princess Debut is also a rhythm game. You use the touch screen to drag a purple ball around to the beat of the music.