Visual Novel / RE: Prince of Nigeria 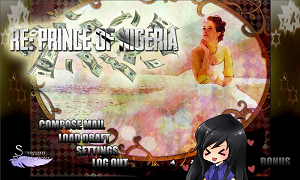 "My heart began thumping furiously in my chest... like an apple core in a moving recycling truck..."

"Once upon a time, I met a prince... the Prince of Nigeria. Throughout his lovely poetry and wonderful serenades of emails, I couldn't help but fall in love with him. Too bad falling in love with a prince isn't all flowers and bunnies as fairytales claimed—we were playing a dangerous game of passion, wildfire and strife..."

Horai Owen is perhaps not the brightest girl, nor has she had the best luck with relationships. Fortunately, she and her ex-boyfriend Zak are still on good terms, thanks in part to the fact that Zak is actually her laptop. But Horai is about to enter a new relationship with a mysterious and charming prince who has contacted her by email. But being in love with a prince isn't easy, especially when money and politics get involved...

RE: Prince of Nigeria is a Ren'Py-based Comedy Visual Novel by Soyasushi Productions about a girl who falls for a 419 Scam.