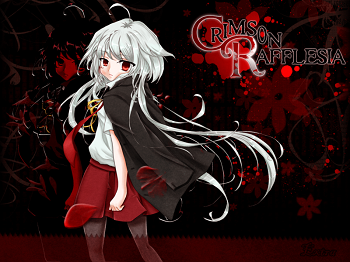 In a certain country during the late 20th century, a series of strange deaths occurred. All of the victims were found with their bodies putrefied, even though they shouldn’t have died more than a few hours ago. This, however, stopped as quickly as it had come, only to be replaced by a series of strange disappearances. The government tried to hush it up, because they had no leads – to no avail. The powerful Wilshire Corporation continued to keep tabs on the case, while at the same time a secret private detective group went on a manhunt for the perpetrator. These cases closed upon the unfortunate deaths of said group in an accident. Years passed. All was well.

All was well, until the decaying corpse of Mikaela Lane turned up at the back of an abandoned church.

This story is set a year after that – about a young female corporate mercenary, Sho Reilen, who is skilled in the use of swords. She has something she wants – to confront Kaison Voltaire, a young man who seeks to hunt her down in revenge for the death of his beloved friend, Mikaela.

Crimson Rafflesia is a Visual Novel by Soyasushi Productions

. It is a story about truth and lies, love and hate, and a field of decaying flowers.

This game now has a character page.

A demo can be downloaded here