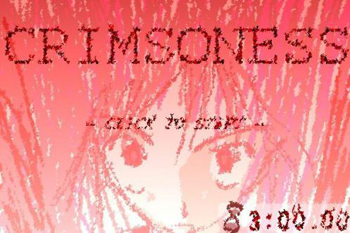 Your name is Bakumi Moriyama, and you're having a very bad day. You just did your very best at a test, without having to cheat or anything, but in the last 3 minutes you realize that you accidentally put all the answers in the wrong spaces, and it's too late to go back and fix it. So obviously there's nothing left to do but snap horribly and go on a rage-fueled rampage through the school, annihilating delinquents, crocodiles and evil demonic busts, all while your rage grows stronger and stronger until it destroys the Earth itself.

Crimsoness (Shakunetsu Hime in Japanese) is a very short, but hilarious Freeware Visual Novel, in which you try to destroy as much as possible before the 3 minutes are up, building up your Rage Meter and trying to find ways to increase your limit so you can take on more powerful foes. The art style is very simple and MS Paint-ish, but effective.