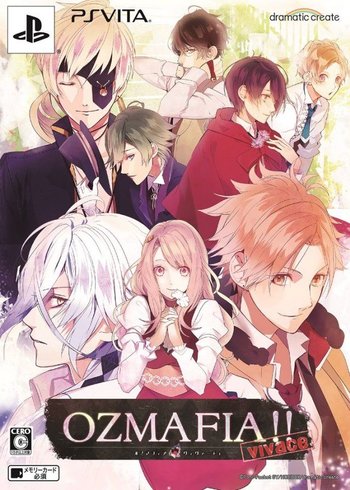 A young woman wakes up in an alleyway with no memory of who she is or how she got there. Looking up, she sees a silver-haired man staring at her. He proclaims her to be his prey, draws a sword, and begins running towards her. She instinctively flees in the opposite direction... only to crash straight into the local mafia don. Fortunately, he's a good-natured sort who's not one to abandon a lady in distress. After routing her pursuer and determining her unfortunate situation, Don Caramia offers her shelter within Famiglia Oz's territory while she adjusts to life in the town.

OZMAFIA!! is an Otome Visual Novel originally made by Poni-Pachet SY, and localized by MangaGamer in 2016. It's set in a vaguely historical fantasy town ruled over by characters from Western fairy tales and (mostly) children's literature, who make up various mafia families. Most prominently influenced by The Wizard of Oz. It was adapted into a short anime in the summer of 2016 and was ported to the Play Station Vita under the name Ozmafia -vivace-