This page details tropes for Sinon from Sword Art Online. 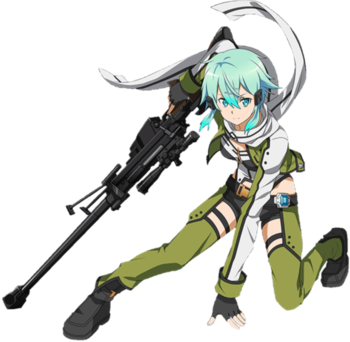 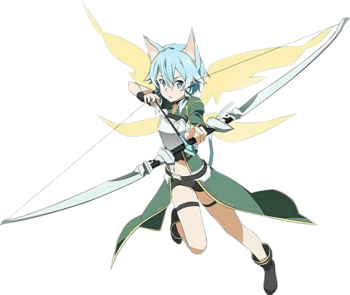 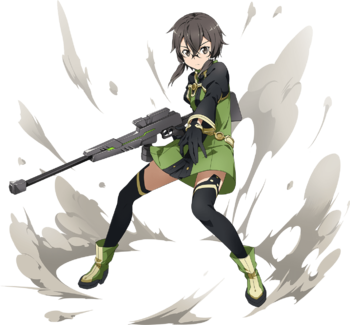 "I've taught you so much, but I want to teach you one last thing. The taste of the bullet that means defeat."

The female lead and Deuteragonist of Phantom Bullet (volumes 5–6). An elite sniper in Gun Gale Online who wields the rare anti-material rifle "PGM Ultima Ratio Hecate II". Due to a Dark and Troubled Past, Shino grew up with no friends and a crippling phobia of guns. She first joined GGO as a form of immersion therapy, but soon found she was ridiculously talented at the game and become one of its top players. She soon becomes involved in the "Death Gun" incident where a mysterious player is seen murdering players in-game and causing their deaths in real life, with Sinon being one of said targets. She first meets Kirito when he had joined GGO to investigate and she mentors him in the game, before discovering his real gender and declares him The Rival. Joining the "Bullet of Bullets" Tournament with Kirito, the two of them end up teaming up to find Death Gun and bring him down before he can kill anyone else.

She later joins ALO to be with Kirito and his friends, where she becomes a Cait Sith archer. Known to be calm and collected, as well as a Badass Bookworm, she is grateful to be accepted among Kirito's friends after being alone for so long.

After Kirito gets trapped in the Underworld, Sinon is called on to assist and logs in with the Super Account Sun Goddess Solus.