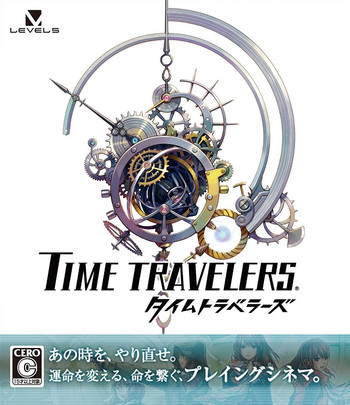 "What is your most precious moment? And if it were 'broken'... wouldn't you try to fix it?"
Advertisement:

Time Travelers is an Adventure Game for the Nintendo 3DS, PlayStation Portable, and Play Station Vita by Level-5, creators of the Professor Layton and Inazuma Eleven series.

Eighteen years ago, a mysterious portal now known as the "Lost Hole" appeared over Tokyo, causing massive devastation to the city. The city is now rebuilt and powered by a miles-high structure known as the "Space Elevator", though exactly how it does that is unknown to the populace.

On April 28, five people find themselves involved in the fate of a young girl named Mikoto; but none encounter quite the same one. Ordinary High-School Student Yuri Fukase, rumored to be connected to the Lost Hole incident, finds his classmate Mikoto waiting atop the school roof for him. Idol reporter Hina Fushimi receives a mysterious videotape from a similar Mikoto while investigating the mysterious Skull terrorism group. Detective Soma Kamiya finds his attempts at terrorism in exchange for his family's safety complicated by a raincoated, pistol-wielding Mikoto onboard a city bus. 30-year-old self-declared superhero Ressentiment finds himself protecting Mikoto from some local thugs. And brilliant former physicist and con man Kyugo Shindo has only a few hours to pay back 30 million yen or his daughter Mikoto will be killed.

Gameplay takes place through a mix of Quick Time Events, Visual Novel portions, and jumping from character to character to try and advance, similarly to 428: Shibuya Scramble. Unlike most visual novels, the characters are fully voiced and animated.

The game was released in July 12, 2012 in Japan, but no Western release has been announced.