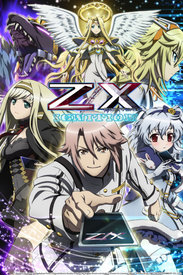 Z/X Ignition is an anime that aired between January and April 2014. It is based on the Card Game Z/X: Zillions of Enemy X.

The Black Spots, giant black spheres that simultaneously appeared around the world, engulfing large parts of many major cities. From them, armies of monsters from alternate futures appeared and attacked indiscriminately. These monsters were called Zillions of Enemy X, or ZX (pronounced "zecks") for short. For a time, mankind had no means of fighting back. However, after the development of a special device that allowed people to contract and control certain ZX—a technology promptly entrusted to the military and law enforcement—many urban areas were able to regain stability.

However, all is not as it seems, as the armies that lay in wait on the other sides of the Black Spots are waiting. They enlisted humans to fight for dominance, and are determined to conquer one another, with little regard for the humans caught in the middle of their war. Japan was especial hard hit, as after the initial appearance in Tokyo, four additional Black Points also appeared around the country. The forces from each of the five worlds have carved out their own parts of the county.

Enter Asuka Tennouji, an ordinary young man who's lucky enough to live in an area of Japan that's regained stability despite being in close proximity to a Black Spot. On his way to his part time job (on Christmas Eve no less), an impromptu shortcut leads to a chance encounter with a strange girl dressed as a priestess. She claims to be the priestess of the dragons, and entrusts Asuka with a device that allows him to catch and control ZX, and tells him to protect the world. Later on that very same day, Asuka has a chance encounter with a powerful angelic ZX...