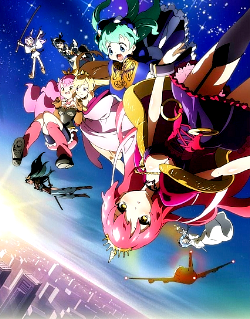 Oda Nobunaga has a lot of collecting to do.
Advertisement:

In an alternate universe, the major figures of the Warring States period were all women. Right after the incident at Honnou-ji, something happens, flinging this world's Nobunaga through time and space into our world - modern day Tokyo, to be exact. Within her first day of arrival, she runs into an ordinary boy, names him her retainer, and is set with a mission. She must find the Secret Treasures in order to return home. Of course, other figures from the past will follow after her.

Based on a cell phone game, Sengoku Collection was turned into a Spring 2012 Anime. It can be watched at Crunchyroll