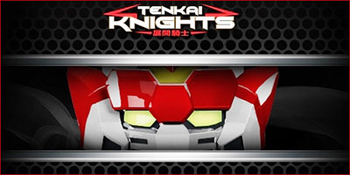 Tenkai Knights is a Japanese-Canadian anime collaboration between Studio Bones and toy company Spin Master, about a group of kids in the year 2034 who find they are able to turn themselves into robot-alien heroes on a distant planet.
Advertisement:

...Millennia ago, the peaceful cube–like planet Quarton, populated by shape–shifting living bricks, was ravaged by a war between the Corekai and the Corrupted, led by the ruthless warlord Vilius who desired to obtain all Tenkai Energy for his own purposes. However, the only ones who were strong enough to defeat him were the Tenkai Knights: Bravenwolf, Tributon, Valorn, and Lydendor.(and also Dromus & Venetta). Facing defeat, Vilius unleashed the mighty Tenkai Dragon, the beast was defeated by the four Knights and its fragments were scattered. These heroes were never seen again, but the Corrupted have returned more powerful than ever. A group of four (later joined by 2 others) kids have chosen to become the new Tenkai Knights, in order to save the both worlds from Vilius' tyranny.

A second season was announced, but it was cancelled before production.