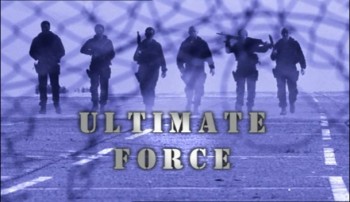 Ultimate Force. Originally starring Ross Kemp, Jamie Draven, Tony Curran, Danny Sapani, Sendhil Ramamurthy and Miles Anderson as members of the British Special Air Service Regiment, more specifically the fictional 'Red Troop'. Created by Rob Heyland and Chris Ryan, the show's first two series presented a stark and brutal demonstration of what the operators of the SAS go through, from hostage rescue to preventing an assassination, and the repercussions of their actions both with the world at large as well as with their families and friends. People die. But then it went pear-shaped with the beginning of the third series. The entire cast, excluding Ross Kemp, Miles Anderson, and Christopher Fox. were given the boot and replaced with a new cast.

The show has aired in over a few countries now, including recently the USA (via BBC's American channel) aside from most of Europe, Oceania and Japan (as SAS: British Special Forces in Japanese). It's also available only in DVD currently with a collector's edition that collects all of the DVDs from all four seasons.