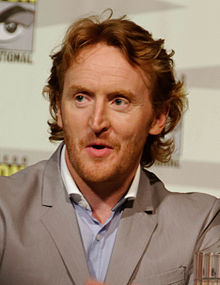 "I've been lucky. I don't for a minute take for granted the good fortune I have had. You don't like to get ideas above your station, especially a boy from the south side of Glasgow."
Advertisement:

Anthony Curran (born 13 December 1969) is a Scottish actor. A highly prolific character actor, Curran is forever popping up in television, film and theatre in a variety of roles.

A Sci-Fi and Fantasy mainstay, he's perhaps most recognised for his roles in Underworld: Evolution and his critically acclaimed portrayal of Vincent van Gogh in Doctor Who. He also starred on Syfy's Defiance as Datak Tarr.