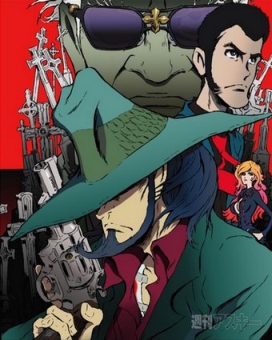 Lupin: And there's no man who can beat Jigen on the draw.note Clockwise from top right: Jael Okuzaki, Lupin III, Fujiko, Mine, and Daisuke Jigen.
Jigen Daisuke with .357 Magnum. Died 1st of April 1975. Rest In Peace.
Advertisement:

Daisuke Jigen's Gravestone* 次元大介の墓標 (Jigen Daisuke no Bohyō), released in June 2014, is the seventh animated theatrical film in the long-running Lupin III franchise. Produced at Telecom Animation Film – the same studio that animated The Castle of Cagliostro along with a few other Lupin projects – it is a Spiritual Sequel of sorts to the 2012 spin-off TV series The Woman Called Fujiko Mine. Like Fujiko, this series features character designs and animation direction by Takeshi Koike, but this time he also serves as Chief Director. It was written by Yuuya Takahashi.

Unusually for a Lupin film, it originally ran in Japanese cinemas in two parts of about 25 minutes each, making it the shortest film in the franchise (its followups are a few minutes longer). Lupin wears a Teal Jacket here – not quite Green, not quite Blue; Jigen also wears slightly more colorful clothing than usual.

Arsène Lupin III and Daisuke Jigen have teamed up to steal the Little Comet, a priceless gemstone, from East Doroa by disguising themselves as ambassadors. Relations between East and West Doroa have been tense, especially since the previous week's assassination of Queen Malta, the star singer from East Doroa who had hired Jigen to bodyguard her.

The caper goes wrong, and while the duo manages to escape with their prize, the police seem exceptionally good at chasing the two. What they didn't foresee was the involvement of an assassin who shoots them several times and as a result they barely escape with their lives.

The sniper, Yael Okuzaki, is known to make gravestones before his targets are killed, and there's not yet anyone who has survived being his target. Jigen decides to face his would-be killer, and with Lupin tagging along, goes to find Yael. Unfortunately, that results in the pair getting cornered by the sniper, who shoots Jigen in the head!

The decent performance of this film led to two sequels in the same continuity (using the same format): Goemon's Blood Spray in 2017 and Fujiko's Lie in 2019.

It was licensed by Discotek Media for North American release (as were its sequels when they came out). This release has the distinction of being Discotek's first self-produced English dub, courtesy of BangZoom. Discotek's policy up until this film had been to use preexisting dubs but not commission new ones. Since then, with an assist from TMS, they have made exceptions with Lupin in a few cases (mostly newer entries).