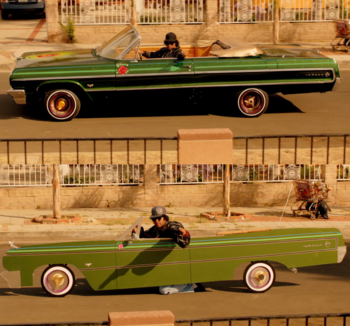 "Well it was about that time that I noticed this 'Girl Scout' was about eight stories tall and was a crustacean from the Paleozoic Era."
— Chef's Dad, South Park, "The Succubus"
Advertisement:

Note that magic, visual tricks, or a masquerade suddenly falling apart (see Game Face, Glamour Failure, The Shadow Knows, Missing Reflection and The Mirror Shows Your True Self) once the characters come to their realization are not involved. Rather, the disguise or object should logically appear to be obviously-fake the whole way through, but the visuals portray it as if it were the real deal so that both the characters and audience will be fooled until The Reveal when the visuals change for no discernible reason. In Watsonian versus Doylist terms, while the Doylist explanation for why its appearance changed is that the audience needed to be fooled just like the characters, there is no Watsonian explanation for why the audience saw it the way they did, at least not for stories that don't have an Unreliable Narrator who describes and visualizes absolutely everything as it's happening with no alternate perspectives. There might be a minor Rewatch Bonus revolving around hints in the behavior of the person or object, but visually, there's unlikely to be anything.

Compare Paper-Thin Disguise where an obviously-fake disguise is obvious to the audience the entire time rather than suddenly changing once the truth is revealed. Also compare Tomato Surprise. Through the Eyes of Madness would occur if the audience and characters see the fake thing as real because the character serving as our viewpoint is crazy, though this trope would be more "Through the Eyes of the Deceived" until they find out the truth and the perception changes. An Ass Pull can occur for extreme examples, but not always.

Due to the bait-and-switch nature of this trope and how heavily it relies on the audience going in blind, expect spoilers.