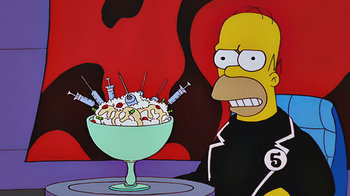 "Look, you can drug me all you want, but my family won't rest till they find my drug-bloated corpse."
Advertisement:

Homer gets into the Internet by becoming an online gossip columnist-cum-conspiracy theorist, whose stories land him on a bizarre island for people who know too much (and is modeled after the one from the TV show The Prisoner).