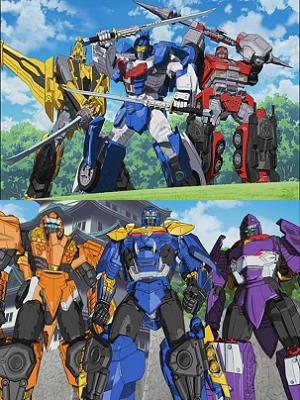 The story takes place after the main team of Autobots have vanquished the Decepticons from earth, and follows the adventures of a team of Autobots who remain on the planet in order to fight off any remaining threats. Dragontron (Predaking) has stirred from his resting place, and Predacons have scattered around to find the Legend Discs to fully awaken him. Two have found their way to Japan's feudal era, while a pair of boys gained the remaining two. When the Predacons come after them, the Legend Discs each awaken a team of Autobots, the Samurai and Shinobi Swordbot Teams, to defend them.