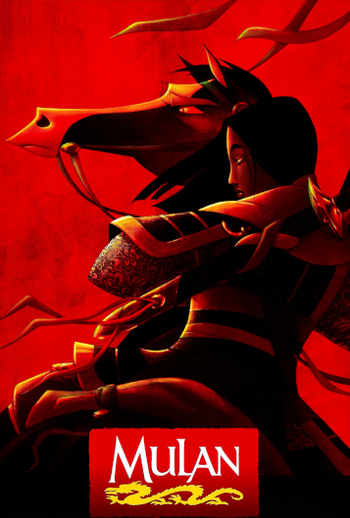 Somehow I'll make a man out of you!
"You'll bring honor to us all."
Advertisement:

Mulan is an animated film released in 1998, as the 36th film on the Disney Animated Canon. It was inspired by the Ancient Chinese folk legend of Hua Mulan (花木蘭).note Disney chose to romanize the heroine's name as Fa Mulan, in effect giving her family name the typical Cantonese pronunciation, but her personal name the normal Mandarin one. The film deals with Huns invading Imperial China, led by the vicious warlord Shan Yu, resulting in every Chinese family receiving a conscription order requiring one male from their household to serve in the army. The title character, Fa Mulan (Ming-Na Wen), has no brothers, resulting in her veteran father being forced to accept the conscription. Fearing that her father's old age and crippling injuries will result in his almost certain death against the Huns, she steals his sword and armor, cuts her hair, and goes in his place, disguised as a man.

As Mulan is the only lineage of the Fa family, her ancestors order the disgraced guardian Mushu (Eddie Murphy), who is small and has a penchant for comedy, to send the Great Stone Dragon to fetch Mulan home safely, but Mushu accidentally breaks the Stone Dragon's statue. He then goes in his place, but rather than fetching Mulan, hopes to make her a war hero and bring himself to glory.

Under the assumed name "Fa Ping", Mulan undergoes many hardships in basic training, but eventually wins the respect and friendship of her fellow soldiers, as well as that of her commanding officer, Captain Li Shang (B.D. Wong), and marches with her company to confront Shan Yu and his Huns in a battle that will decide the fate of all of China.

The film was followed by a Direct to Video sequel in 2004, Mulan II. A Graphic Novel, Mulan's Adventure Journal: The Palace of Secrets was published by Dark Horse Comics in March 2020. A live-action version was released on Disney+ in September 2020. A version of Mulan has also appeared in the live-action TV show Once Upon a Time (which is also produced by Disney), where she is played by Jamie Chung.

Example of:
So Proud of You

Mulan vs. The Huns

Mulan vs. The Huns