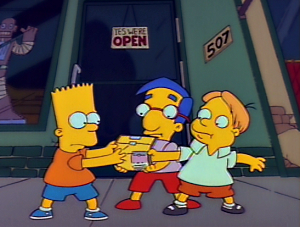 "Looks like you bought more than you bargained for." (Evil Laugh)
Advertisement:

In this homage to the film The Treasure of the Sierra Madre, Bart (after only earning 50 cents from an old woman [voiced by Cloris Leachman] who hired him to do dangerous chores), Milhouse [who only wanted to buy a baseball card], and Martin pool their money together so they can buy the first issue of Radioactive Man, but their greed, jealousy, and paranoia turn them against each other and turn the treasured comic book into shredded paper.