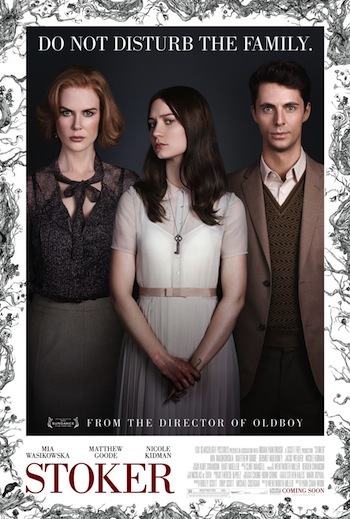 A 2013 film from acclaimed director Park Chan-wook, and his first English language production, with a script by Wentworth Miller of Prison Break fame.

After 18-year-old India Stoker (Mia Wasikowska) loses her beloved father Richard in a car crash, a mysterious man shows up at the funeral - her uncle, Charlie (Matthew Goode). While India is apprehensive of a family member she's never even heard of until now, and suspicious about his motives, her unstable mother Evelyn (Nicole Kidman) welcomes Charlie into their home. Witty and attractive, Charlie fills the hole Richard left behind - in more ways than one. Evelyn's infatuation with him grows, but India's manipulative, charming uncle seems to be more interested in India herself...

This can only end well.

Despite having a title that's rather similar to the surname of that guy who wrote Dracula, the film is not, in fact, about vampires.note  Park already did that in Thirst (2009). (Although Word Of God admits that the book was a big influence, as was Alfred Hitchcock's Shadow of a Doubt.)