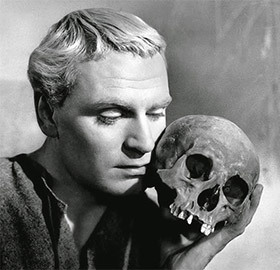 A Dane and his Pal
Momo: [chitters]
Aang: You're right! Maybe an Air Nomad Avatar will understand where I'm coming from!
Momo: [quizzical tilt]
Aang: I know you can't really talk. Pretending you can just helps me think.
— Avatar: The Last Airbender
Advertisement:

Your character is alone, but (if literature) you're not using a first-person POV. If a dramatic medium, no one else is in view. On stage, you can get away with a soliloquy (if you're William Shakespeare) because the audience is, you know, right there. If you don't mind Breaking the Fourth Wall you can even do it on screen. You could use Inner Monologue...but for whatever reason, you don't want to go there. So how does one get a lone character to talk without making it look as if they are Talking to Themself?

They talk to something, making it The Confidant. An Empathy Pet. A Companion Cube. The mirror (but that's a special case). They ask rhetorical questions of things that are conveniently incapable of answering. They do dialog-based exposition that no one capable of repeating it can hear...but you, the reader/viewer, DO. Unlike Trick Dialogue, it's generally played straight up, but the two can shade into each other. Note that if you are in fact the aforementioned William Shakespeare, you can pull this off with others on stage, if you just ignore them and concentrate on the object at hand (see picture adjacent).

Convenient for when you don't want to bring on another character for whatever reason but still want to make them spill their guts.

A common variation of the trope involves the speaker using the object as a substitute for a particular person, whether a love interest around whom they Cannot Spit It Out or a deceased relative (here a picture or the grave/tombstone itself is often the patient listener).

Another variant: the "object" happens to be both invisible and godlike, i.e., the soliloquy is actually a prayer.

Compare Thinking Out Loud, where a character is in fact voicing their thoughts to the open air, or Companion Cube, where the object is treated as an actual character, sometimes for a good chunk of the story (think Wilson in Cast Away); also Captain's Log, where the object is a recording device of some sort (electronic or journal), and they're expected to relate to it. Compare also Consulting Mister Puppet, for when you're acting as if the object talks back to you. Super-Trope of Talking to the Dead and Converse with the Unconscious.