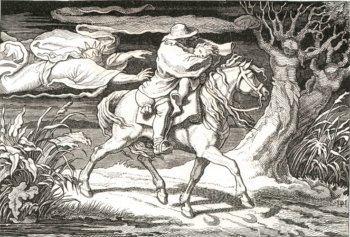 "Erlkönig", by Hermann Plüddemann (1852)
"Wer reitet so spät durch Nacht und Wind? Es ist der Vater mit seinem Kind." note Who rides there so late through the night dark and drear? The father it is, with his infant so dear.
Advertisement:

"The Erl-King" or "The Alder King" ("Erlkönig" in German) is a German ballad written by Johann Wolfgang von Goethe in 1782.

It tells the story of a father who is carrying his sick son, while riding homewards after dark on horseback. The son is convinced that they are being pursued by the Erl-King, who speaks to him to persuade him to come away with him, while the father insists that the Erl-King doesn't exist — what he sees, so he tells the boy, are only trees, bushes and fog. Yet the boy will not be calmed, finally screaming that Erl-King is touching him. Even the father is horrified now, and rides the horse as fast as possible. When he arrives, he realizes that the boy is dead.

The poem was inspired by a Danish folk tale, which was translated to German as "Erlkönigs Tochter" ("Daughter of the Arlen King"). However Erlkönig is a mistranslation (by Johann Gottfried Herder) of the Danish "ellerkonge", which actually means "King of the elves" (that would be "Elfenkönig" in German, in case you wondered). It is possible that Goethe went with the "wrong" translation consciously, as the Erl-King does not fit in with what most people of the era would have recognized as an Elf-King; in the ballad, he seems to serve as a substitute to the Grim Reaper or Death. The "rational" interpretation is that the boy is hallucinating from fever.

"Erlkönig" is one the most recognizable of Goethe's works for Germans, thanks to its time-honored status as an inevitable school study medium. So is Zhukovsky's adaptation (see below) for Russians.

The poem was set to music (for solo voice and piano) by Franz Schubert in 1815. In Germany in the 20th century the word "Erlkönig" came to denote a car prototype on a nightly Autobahn test drive (speeding, like the father in the ballad, "through night and wind" and fog) in an attempt to evade photojournalists.

Schubert's "The Erl-King" had various other adaptations on its own, including a piano-only version by Franz Liszt, and a famous violin rendition by Heinrich Wilhelm Ernst, which is considered one of the most technically difficult solo violin pieces of all times, if not the most difficult. Ernst's version is notable for including identifiable individual parts and tone variations for the music accompaniment (which is played throughout), the father (in lower notes), the son (in high notes), and the Erl-King himself (in dulcid notes).

A rhyming translation can be found on Wikisource.