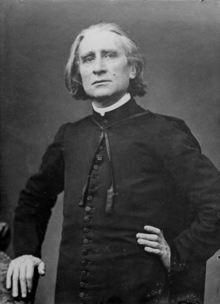 Before there was Beatlemania, there was Lisztomania. Franz Liszt (22 October 1811 – 31 July 1886) was the Trope Codifier for all music stars that came after him. (Violinist Niccolo Paganini was the Ur-Example, for anyone interested.)

As a child prodigy, Liszt was stage-managed by his father Adam (who played cello in the Esterházy family's orchestra under the baton of Joseph Haydn, and through whom the teenage Liszt met Ludwig van Beethoven and Franz Schubert at least once each), until he dropped dead in 1827. Liszt entered a self-imposed exile until the 1830s. After coming out of seclusion, he toured for nine years in Europe, and accrued a devoted fanbase comparable to that of today's pop stars. When Liszt got tired of touring, he settled in Weimar, where he first met that young hotshot composer Richard Wagner. They were musical kindred spirits, with a flair for the dramatic. Liszt actually premiered several of Wagner's operas. A number of Liszt's musical themes turned up in Wagner's work (we assume by permission?!). In 1870, Wagner married Liszt's daughter, Cosima. After 15 years in Weimar, Liszt moved to Rome. Though Liszt was quite the womanizer, he was a practicing Roman Catholic; nonetheless, his decision to become a priest (well, a monk, actually — a Franciscan Third Order Secularnote St. Francis created the Third Order or "Tertiary" for men and women who were married or couldn't for other reasons join a monastic community but wanted to devote themselves to a holy life) shocked everyone. After he took up the cloth, Liszt spent the last years of his life teaching in Rome, Weimar, and Budapest (which must have been quite the commute). Liszt died in 1886, in Bayreuth (where he did not want to be, and said so many times) during the big Wagner Festival; without having his Last Rites, with his request to be buried simply in a monk's robenote actually, the Tertiaries don't wear robes ignored.

He is the composer of the Hungarian Rhapsody No. 2, immortalized in the cartoons "The Cat Concerto" and "Rhapsody Rabbit" as the definitive concert piano music.