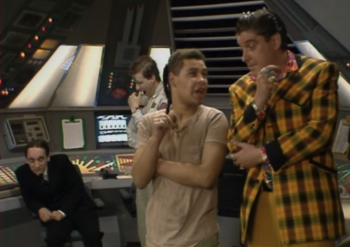 A conference between a man, a dead man, and two figments of someone's imagination. Just your average day aboard the Red Dwarf.

The episode opens with Lister on the bridge, enjoying a beer milkshake and a sappy film when he's interrupted by Holly, who is bored and needs Lister to erase some memory so that Holly can enjoy Agatha Christie novels again—having read everything, ever. Lister moves to his quarters to finish the film, but is interrupted again by Rimmer, being obnoxious as usual. Rimmer is aghast that Lister has gone down to the officers' block, as they haven't been sterilised yet - just because it was on Rimmer's "To-Do" list doesn't mean it was actually done. Lister was looking for Kochanski's dream recorder and talks about Petersen's theory of a person's Confidence and Paranoia, and how Paranoia always won when he wanted to chat her up. He tries to talk Rimmer into saying where he hid the other holo-disks, but Rimmer won't tell, not wanting to get switched off.

That night, Lister feels sick, tries to get to the medical quarters, and faints. Rimmer runs to the Cat for help. Cat immediately jumps to his feet—and then sits back down to keep eating once Rimmer has run out again, forcing Rimmer to employ the skutters. He's running a high fever from a virus that has spent three million years mutating in the unsterilised officers' quarters..

Later on, Lister's fever dreams become real, first as a rain of fish, and then as the titular Confidence and Paranoia. Paranoia is a sickly little man in a black suit who is mortified beyond compare at everything Lister does or has done. Confidence—played by Craig Ferguson—loves absolutely everything Lister does. Lister naturally loves Confidence, ignoring Rimmer's protests that they're symptoms. Rimmer tries to have Paranoia lethally injected while Confidence helps Lister figure out where Kochanski's holo-disk is: right outside the window of their sleeping quarters. Despite Rimmer's failure, Paranoia goes missing.

As Lister and Confidence go on a spacewalk to find the disk, Confidence casually reveals that he killed Paranoia (cha-cha-cha) for always tearing Lister down, and that Lister can do a lot better than a loser like him. In fact, Lister is so great he should just take his helmet off and relax—only losers need oxygen! An argument and a scuffle ensues as Lister naturally refuses. Confidence decides to show Lister how great it would be, removes his own helmet, and immediately blows up.

Shaken, but triumphantly in possession of Kochanski's disk, Lister plugs it in. It turns out... to be another Rimmer. Because like hell Rimmer would be stupid enough to leave Kochanski's disk in the envelope labeled Kochanski!