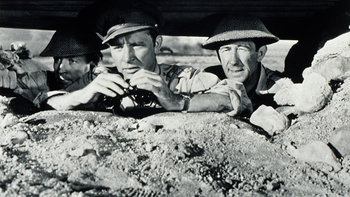 It tells the story of the siege of Tobruk, April-November 1941. The German advance from Libya into Egypt has cut off the vital Libyan port of Tobruk, which remains in Allied hands. Captain "Tammy" MacRoberts (Burton) is given command of a company of green troops from Australia who lack a senior officer. The free-spirited, boisterous Australian soldiers don't much care for their new no-nonsense CO, and he is rather unimpressed by his undisciplined raw recruits. MacRoberts does however find one friendly face, and it's quite a surprise: his old schoolmaster Tom Bartlett, who lost his teaching position due to alcoholism and made his way to Australia before joining the army.

James Mason plays Erwin Rommel once again, only two years after he had starred as Erwin Rommel in The Desert Fox. However, despite being billed second on the posters, Mason only appears in a couple of scenes. He's much more villainous in this film too - the film was made in part because people complained The Desert Fox had made Rommel too sympathetic.