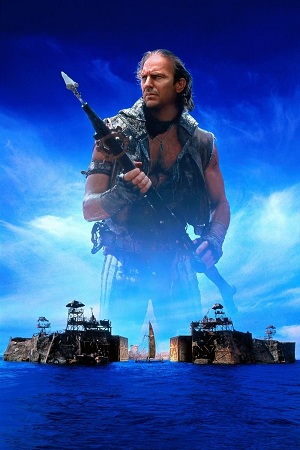 "Dry land is not just our destination, it is our destiny!"
— Deacon
Advertisement:

Waterworld is a 1995 Science Fiction film and the second major collaboration between actor Kevin Costner and director Kevin Reynolds after Robin Hood: Prince of Thieves. It also stars Jeanne Tripplehorn and Dennis Hopper.

Set In a World… where the polar ice-caps have melted due to havoc caused by a geomagnetic reversal. The world is now covered by water. What's left of humanity is surviving on ramshackle crafts tied together to make Atolls (villages). The Mariner (Costner) enters one of these Atolls to trade, but is discovered to be a mutant and sentenced to death. A gang of raiders known as Smokers, led by Deacon (Hopper), attacks the Atoll. A woman named Helen (Tripplehorn) and her adopted daughter Enola (Tina Majorino) bribe the Mariner to take them to the mythical Dry Land, which no one has ever seen. Conveniently, Enola's back has been tattooed with a map indicating the alleged way to Dry Land. However, with The Smokers hot on their tail, their journey encounters more than a few bumps along the way. And the Mariner is not your traditional plucky hero. He'd prefer just look out for himself.

Essentially, it's Mad Max with the opposite problem: too much water.

The film had a notorious Troubled Production that caused the film's $100 million budget to balloon at $175 million (in 1995 dollars), making it the most expensive film ever made until Titanic two years later.

An extended edition of the movie was also released, adding roughly one hour of world building and background information, which was cut before the theatrical release. Unfortunately it also cut a lot of violence and some of the rougher scenes as it was meant for television, so a fan-made version known as the Ulysses Cut was made that mixed the theatrical and extended releases. The general consensus is that both remade versions are much better than the theatrical release.

Despite the film's financial failure, it ended up spawning a stunt show at the Universal Studios parks, called Waterworld: A Live Sea War Spectacular, which over time became more popular and better-known than the movie itself.

Not to be confused with the type of Single-Biome Planet where the whole world is an ocean, although obviously the Earth in this movie comes pretty damn close.