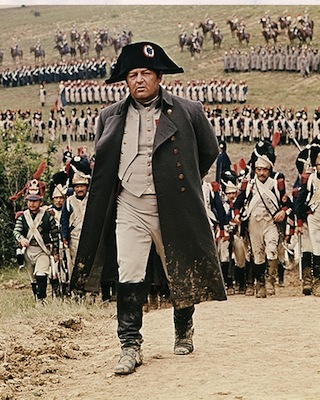 "The throne? You know what the throne is, Ney? The throne is an overdecorated piece of furniture. It's what's behind the throne that counts."
— Napoleon
Advertisement:

Waterloo is a 1970 film produced by Dino De Laurentiis that told the story of the events leading up to the climactic battle of The Napoleonic Wars. One of the most expensive films ever made up to that time, it was a box office failure of legendary proportions but has since gained substantially more respect as an exemplar of old-fashioned epic-style film-making.

The cast includes Rod Steiger as Napoléon Bonaparte, Christopher Plummer as The Duke of Wellington, and Dan O'Herlihy as Marshal Michel Ney. Orson Welles had a well-paid cameo as Louis XVIII, the Bourbon monarch Napoleon overthrows. Director Sergei Bondarchuk recruited thousands of Soviet soldiers as extras and reshaped a large area of Russian countryside to match the topography of the Waterloo battlefield.

The Prussians are here!

Example of:
The Cavalry

The Prussians are here!