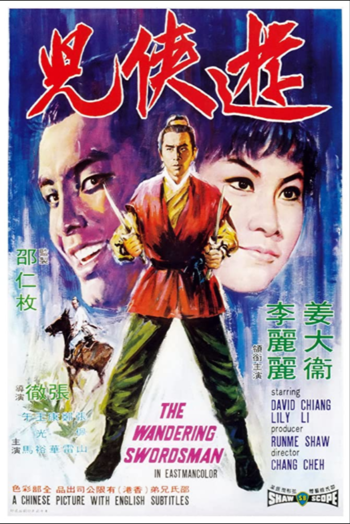 The Wandering Swordsman is a 1970 Shaw Brothers Wuxia movie directed by Chang Cheh, starring David Chiang, then fresh off Have Sword, Will Travel and now cast in his first starring role as a titular main character.

In a plot that's lifted mostly from Yojimbo, David Chiang plays You Xia-er, a Wandering Swordsman who enters a small town occupied by two feuding bandit gangs fighting each other for territorial control. When one of the gangs intend to rob a government convoy carrying treasure passing through the village, You Xia-er decides to infiltrate the gang to seek a chance to destroy both gangs from within.

David Chiang will eventually become a household name in martial arts cinema with his next major release, Vengeance! (1970) just a few months later.