Film / Have Sword, Will Travel 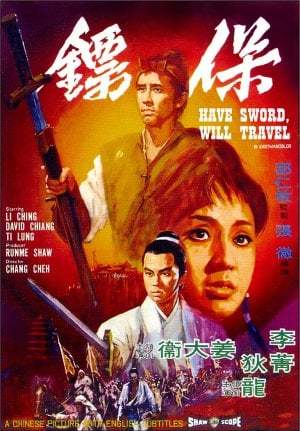 Have Kickass Martial Arts Skills, Will Take Tons and Tons of Names in Massive Action Scenes

Lung and Chiang, having appeared the same movies like Return of the One-Armed Swordsman and Vengeance! (1970), but separately without each other onscreen, finally shows up together in this movie, the first of twenty-odd Shaw Brothers films with Lung and Chiang appearing - and kicking ass - side-by-side.

Xiang-ding (Ti Lung) and Yun Piao-piao (Li Ching) are sword-fighters, martial artists, mercenaries and a pair of lovers engaged to be married, but a week before they can tie the knot, they're given one last assignment: to escort a valuable cargo of gold through hostile territory in the Northern Fields, a territory owned by the powerful Flying Tigers gang of marauders. To make things complicated, the arrival of a new elite swordsman, Lu-yi (Chiang), serves as a potential romantic rival for Xiang-ding.

Have Sword, Will Tropers: