Film / The Watcher in the Woods 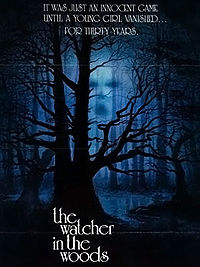 A 1980 live-action Disney film based on the YA novel by Florence Engel Randall, The Watcher In The Woods is a supernatural mystery about a family that moves into an old British manor. Shortly after, the two daughters attract the attention of what appears to be a ghostly presence lurking in the woods surrounding their house. Elder daughter Jan finds herself unraveling a thirty-year-old mystery in order to save her little sister Ellie...as well as another young girl thought lost long ago.

The movie is notable for being a well-done example of a suspenseful thriller, making good use of atmosphere to develop a sense of tension and urgency as the plot unfolds and creating a rather emotionally challenging story while still being accessible to kids (although younger children may find it too scary), while also managing to be quite different from the typical Disney fare of the era. The initial advertising for the film played up this aspect, warning parents that the film was somewhat darker than the typical Disney fare.

The film is also known among fans for its Troubled Production. Due to Disney's rush to release Watcher in time for the fiftieth anniversary of star Bette Davis' film debut, special effects in the climactic final sequence were left unfinished, resulting in derision and disappointment from test audiences. An attempted second ending, minus the special effects, left the resolution so vague that audiences were confused as to what had just happened. Finally, at the last minute, a very different third ending was filmed with a new director; this final version was the one that made it to theaters in 1981. The multiple endings led to a long-running Urban Legend that the original ending had been so terrifying that Disney refused to release it. The two unused endings were later made available as an extra to the remastered Blu-Ray release.

The Movie Contains Examples Of: