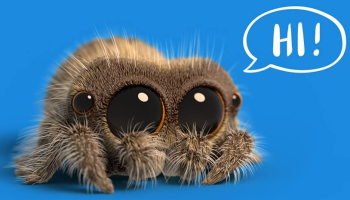 "A spider's life can't help being something of a mess, with all this trapping and eating flies. By helping you, perhaps I was trying to lift up my life a trifle. Heaven knows anyone's life can stand a little of that."
— Charlotte, Charlotte's Web
Advertisement:

Usually Spiders Are Scary, especially if they're giant or so many. But sometimes, spiders can be actually nice and harmless. Sometimes can be used as a pet or an ally, or sometimes, if is a spider person, can be part of the hero team. This is your Friendly Neighborhood Spider, man (ba-dum tish)!

Positive portrayals of spiders in fiction tend to emphasize different aspects of them than negative ones do. Often, the fact that they eat insect pests will be mentioned, and their web-building habits are often used as an example of perseverance and industriousness. Negative or evil portrayals of spiders often play up their use of venom (because Poison Is Evil, after all). Heroic spiders, therefore, are rarely described as being venomous.

It is also worth noting that not all spiders are seen in an equally favorable light. Tarantulas and black widow spiders, which are almost universally considered dangerous (though this is quite exaggerated in fiction compared to reality, especially in the case of the former), rarely get this treatment. Jumping spiders and orb-weaver spiders, on the other hand, are more likely to be portrayed positively since they are considered harmless and look conventionally "cute" to many people.

Contrast Spiders Are Scary, the inversion of this trope, and Scary Scorpions, since scorpions are often portrayed as the Unpleasant Animal Counterpart to spiders. Some Spider People can be seen as this. A Friend to Bugs usually has one as a friend, as might an Animal Lover. Sub-Trope of Good Animals, Evil Animals, in which the spiders are usually Funny and/or Talking Animals, as well Dark Is Not Evil, in which spiders are usually being of color black or another dark colour.