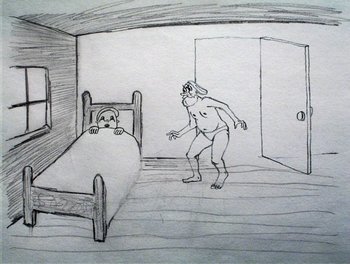 Son, what's all this screaming for?
You're gonna wake the neighbors next door.
"Now you're learning, understanding! Finally, you're becoming human!"
Advertisement:

Story from North America is a series of two animated music videos released on YouTube, with music by Garrett Davis.

The first video, Story from North America, was uploaded on January 15, 2009. It tells the story of a boy who calls his father into his bedroom in the middle of the night to kill a spider crawling around the bedroom. The father teaches the son not to be afraid of the spider, and once the son realizes this, the father releases the spider outside. The video uses hand-drawn animation done by Davis and Kirsten Lepore. You can watch it here

A sequel, Story from South America, was uploaded on September 2, 2013. It was a collaboration between Davis and Animation Domination Hi-Def. As such, it uses flash animation instead of the first video's hand drawn animation. This time, the father and son have to deal with monkeys escaping from prison. You can watch it here

Tropes found in the videos include