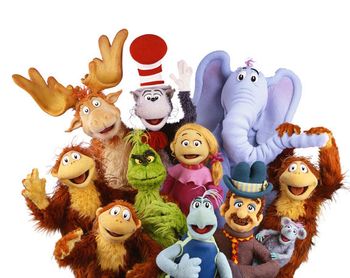 "Tighten up, get loose, in the Wubbulous World of Dr. Seuss!"
Advertisement:

The Wubbulous World of Dr. Seuss is a Denser and Wackier American live-action/puppet television series based on characters created by Dr. Seuss, produced by The Jim Henson Company. It is notable for its use of live puppets with digitally animated backgrounds, and in its first season, for refashioning characters and themes from the original Dr. Seuss books into new stories that often retained much of the flavor of Dr. Seuss' own works.

Each episode of season one is a self-contained story based on Dr. Seuss characters (such as Yertle the Turtle, Horton the Elephant, the Grinch, the Fox in Socks and Mr. Knox, and Thidwick the Big-Hearted Moose). The unifying element is that the stories are introduced and commented on by The Cat in the Hat (performed by Bruce Lanoil) who serves as host of the show. Occasionally, The Cat in the Hat himself appears in the episode, reprising his role as a bit of a trickster, as in his original eponymous books.

It was notable for hewing closely to many of the themes of the original Dr. Seuss stories, which often had a strong moral overtone. As a result, some episodes have distinctly dark or sinister elements which, like some Dr. Seuss books, may not be appropriate for younger children.

Due to complaints about how scary the first season of the series was to some children, season two was completely reworked along the lines of a more traditional Preschool Show. The Cat in the Hat (now voiced by a much less gravelly sounding Martin P. Robinson) lives in a playhouse with his Little Cats A through Z and the often flustered Terrence McBird (performed by Anthony Asbury). Aside from the residents of the house there are usually visitors based on Dr. Seuss characters, including the introduction of Sam-I-Am.

Each episode revolves around a theme (such as family, health, art) and features one or two songs about the theme. The action shifts between The Cat in the Hat and what is going on in his playhouse and shorter related story interludes, which he shows to the audience by means of his "Wubbuloscope". These story vignettes take place in various locations like:

The tone of season two is much lighter, no doubt the result of bringing in a number of comedic writers such as Adam Felber and Mo Rocca. The Cat in the Hat is no longer a trickster and instead has assumed the role of a friendly and enthusiastic host who is helpful, nurturing and sweet. Although this revised format only lasted one season before the show ended, the format was recognizably previously featured in Jim Henson Productions' next children's program Bear in the Big Blue House, which aired on Disney Channel.

The show was treated poorly by Nickelodeon, which it aired on for two seasons from October 13, 1996 to December 28, 1998. It was moved to Nick Jr. once Season 1 ended, and the second season was very quickly burned off.

and the Roku Family Channel

The Wubbulous Tropes of Dr. Seuss: