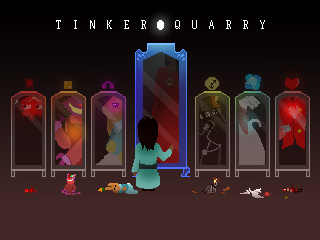 Why don't you stay a while?From left to right Skid, Whiskers, Peter, Adeline, Staya, Stella, and Clint.
"How... did you get in here? Adeline? You're not supposed to be here, Adeline... You need to get out."
— Peter
Advertisement:

TinkerQuarry is an indie RPG (made using RPG Maker among other programs) created by developer Hallowraith (formerly known as Connisaur). It centers around a little girl, whom the player names, who wakes up in Another Dimension known as the Dollhouse, inhabited by Living Toys. First she meets Staya (short for "Stayawhile"), a mechanical dog-like toy who wants the girl to stay and play with him. After Staya leads the girl further into the Dollhouse, she meets a plush rabbit named Peter, who apparently knows her. He tells her that her real name is Adeline, and Staya is a monster who forces all the toys to stay in the Dollhouse forever, and she needs to escape. The girl and Peter begin their quest to help the girl escape from the Dollhouse, all while meeting a quirky cast of other toys, and learning more about the girl's identity and past.

You can purchase the game here

on Steam. The game was in early access for a while, and it was initially uploaded on June 12, 2017. However, the full version was released on September 13, 2019.

Wraith also relelased a Christmas-themed spinoff of the game called JingleQuarry. It tells a story of the toys taking a break from their usual activities to celebrate Christmas together. There are no enemies or battles, your only goal is to explore the Dollhouse (which is decorated for the holiday) and find 12 Peppermints hidden around the Dollhouse to unlock a secret in the library.