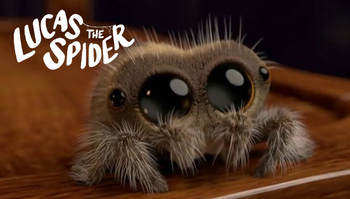 "I have too many eyeballs."
— Lucas
Advertisement:

Lucas the Spider is a slice-of-life series of short (around thirty seconds) animated films created by Joshua Slice and voiced by his nephew, who plays the titular spider. Each of the episodes features Lucas in a different situation and gradually rising in complexity. New episodes are released every three to four weeks and are hosted on YouTube.

In 2018, Fresh TV acquired the rights to the series

to air on Cartoon Network and Boomerang, consisting of 78 seven-minute shorts via the channel's Cartoonito block.

Lucas the Spider provides examples of: