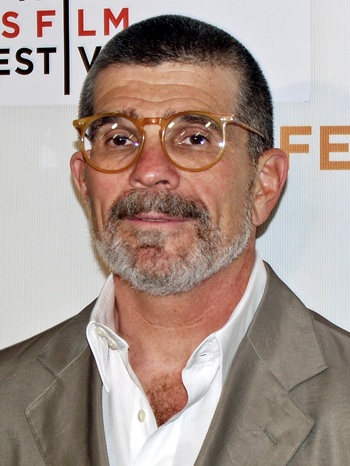 David Alan Mamet (born November 30, 1947) is a renowned American author, playwright, essayist, screenwriter, and film director. He was born in Chicago and educated at Goddard College in Vermont. Mamet is currently married to actress Rebecca Pidgeon, who has appeared in many of his plays and films.

Mamet is most famous for his plays, and the film versions thereof, which are frequently adapted by Mamet himself. These works are known best for clever, vulgar, and rapid-fire worldplay. His plays also tend to be written for smaller casts: American Buffalo, Speed-the-Plow, and Boston Marriage, three of his best-known plays are all three-person plays. He has published more than thirty plays over his forty-year career.

Beyond adapting (and often directing) the film versions of his own plays, Mamet has also written and directed original works for the screen, including Rōnin (writer), Spartan (director), and Redbelt (writer and director). He also wrote the adapted screenplay to Brian De Palma's The Untouchables (1987).

In addition to all of this, he has also written a number of books about the film and theatre industries, which are famous in their own right, some the most famous being Bambi Vs. Godzilla, Three Uses of the Knife, and On Directing Film. He even wrote a book on politics, The Secret Knowledge. Mamet has also published four novels, most recently Chicago in 2018.

His play Race, opened on Broadway December 2009, currently stars Dennis Haysbert and Eddie Izzard, and directed by Mamet himself.

Works by David Mamet that don't have their own pages include examples of: