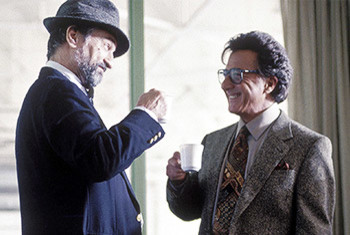 "Why does a dog wag its tail? Because a dog is smarter than its tail.
If the tail were smarter, the tail would wag the dog."
— Opening Title Drop
Advertisement:

Wag the Dog is a 1997 political black comedy film, co-written by David Mamet and directed by Barry Levinson.

The President of the United States (Michael Belson) is caught making sexual advances to an underage "Firefly Girl" (the fictional equivalent of a Girl Scout). His timing could not be worse, as there is a presidential election coming up. Presidential aide Winifred Ames (Anne Heche) and professional spin doctor Conrad Brean (Robert De Niro) are tasked with taking the public attention away from the scandal.

Conrad decides to create a fictional war with Albania. He recruits Hollywood producer Stanley Motss (Dustin Hoffman) to create the illusion of the ongoing war. Actors play war orphans, an army convict (Woody Harrelson) is cast as a war hero, etc. All broadcast by American networks as real news. They take advantage of the relative obscurity of Albania among the public to make up details as they go.

This film was actually not Ripped from the Headlines, because said headlines happened the next year.

This title is, of course, unrelated to Tropey the Wonder Dog.