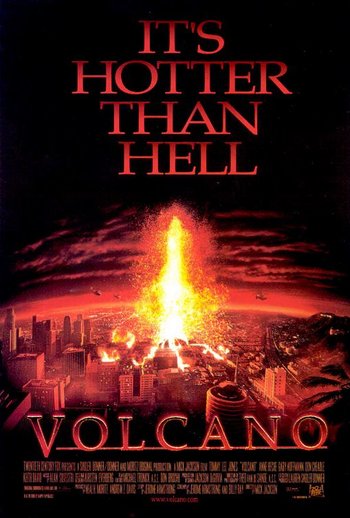 It's Armageddon on Earth!
"We're going to put as many people in front of it as it takes. Listen up, people! Let me tell you what's south of us: no more museums, no more department stores, just homes! People! If we turn and run now, they're going to be defenseless! You don't like my plan? That's good. Give me another plan, but don't tell me we're backing out!"
— Mike Roark
"The coast is toast."
— Tagline

One day, after an early morning earthquake, Roark discovers fire erupting below the city. A scientist, Dr. Amy Barnes (Anne Heche), points him to volcanic activity brewing underneath the La Brea Tar Pits. Later that night, an actual volcano, later named Mount Wilshire, emerges from the tar pits and erupts.

It's up to Mike and his management team, including his second-in-command Emmit Reese (Don Cheadle), to save the city from total destruction.

"The tropes are toast":