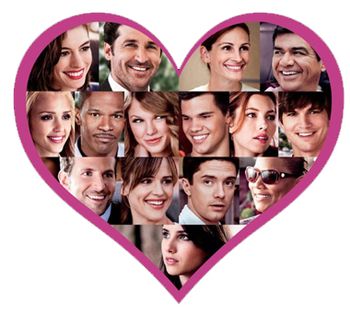 Those aren't even all the main characters.
Advertisement:

Basically, the film follows the intersecting events of various characters, all taking place on the titular day. There's Reed (Kutcher), the hopelessly romantic florist proposing to his girlfriend (Alba). There's Julia (Garner), head-over-heels for a handsome doctor (Dempsey). Jason's (Grace) just starting to fall for his new girlfriend, Liz (Hathaway). Meanwhile Edison (Bryce Robinson) has a crush on a girl at school. His grandparents, Edgar (Elizondo) and Estelle (MacLaine) are getting ready to renew their vows. Kara (Biel) has sworn off love, while Sean Jackson (Eric Dane) is facing the end of a relationship and possibly the end of his career.

Nobody's Valentine's Day quite goes as planned. The flowers don't always reach their intended target; some relationships end, while others blossom. The film also does a good job of weaving the various plots together, and while not all the stories overlap, they form an overall mosaic much the same as the earlier Love Actually.

The movie definitely veers into Chick Flick territory, but the all-star actors give credible performances to prevent it from becoming too saccharine, and the film's various allusions to its cast and its awareness of various Rom Com tropes make it highly enjoyable.