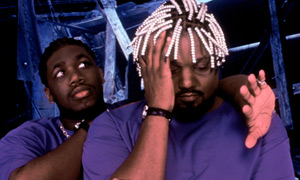 DJ Minutemix (left) and Prince Be (with a throbbing headache)
PM Dawn is an Alternative Hip Hop group who met their greatest success in The '90s, with a unique mixture of Soul, Hip-Hop and psychedelia. The group was formed in 1988 by brothers Attrell Cordes (Prince Be) and Jarrett Cordes (DJ Minutemix) in New Jersey.

The brothers overcame tragedy with the death of their father from pneumonia, and the drowning of their baby brother at the age of two. They were raised by their mother, Janice, a gospel singer, and their stepfather George Brown (incidentally, a founding member of Kool & The Gang). Prince Be was DJing parties in ninth grade, and resolved to make a demo tape with DJ Minutemix of the music he had written. After simply going under "Prince Bee & DJ Minutemix" they eventually chose the name PM Dawn because, as Prince Be put it, "PM Dawn is an abbreviation of the idea that in the darkest hour comes the light."

They met some resistance from labels, who thought they sounded too much like De La Soul. Independent label Warlock issued a debut single for them, "Ode To A Forgetful Mind," but it went nowhere. However, Gee Street Records, based out of the UK, was actually able to market the group better, and they found themselves courted by many major labels in the area. When the label went under, though, they wound up on Island Records, who issued a few more singles in the UK before finally issuing 1990s Of The Heart, Of The Soul, And Of The Cross: The Utopian Experience. First single, "Set Adrift On Memory Bliss," was an international smash and hit #1 on the Billboard Hot 100 in November of 1990. Follow-up single "Paper Doll" hit #28 soon after, and they embarked on a world tour.

The group met some detractors during their big success, mostly from more hardcore rappers, leading to a particularly infamous incident. During their tour, Prince Be ran afoul of KRS-One, when during an interview with Details magazine, Be remarked that KRS-One "wants to be a teacher, but a teacher of what?" Not happy with this, KRS-One and his crew stormed the stage during a PM Dawn show in New York City, forced them off stage, and performed three Boogie Down Productions classics. KRS-One later said to USA Today "I answered his question. 'A teacher of what?' I'm a teacher of respect."

Undeterred by the incident, PM Dawn soldiered on, despite Prince Be being diagnosed with diabetes in late 1992 and slipping into a coma for three days. They finally released The Bliss Album ...? (Vibrations of Love and Anger and the Ponderance of Life and Existence) in March of 1993, fronted by the successful single "I'd Die Without You." The album progressed with their trademark sound and even addressed their detractors on the song "Plastic." The album was another chart success, but unfortunately, their success waned later in the decade. The third album from the fall of 1995, Jesus Wept, sold 88,000 copies, and their fourth album from the fall of 1998, Dearest Christian, I'm So Very Sorry For Bringing You Here. Love, Dad (named for Be's son) met a similar fate. Their last studio album, Fucked Music, was released solely through their website in 2000. That same year, they put out The Best Of PM Dawn featuring nearly all their singles (including "Gotta Be... Movin' On Up" from the Senseless soundtrack) and four remixes.

Prince Be suffered a stroke in 2005 that paralyzed the left side of his body. Despite this, they managed to appear on Hit Me Baby One More Time, a show displaying hit makers from the past in a singing competition, and managed to win the grand prize of $20,000 which was donated to a juvenile diabetes research foundation. Minutemix left the group later to pursue a solo career, and was replaced by paternal first cousin Doc G.

The group hasn't released any new music since 2000, mostly remaining a touring entity. On June 17, 2016, it was announced that Prince Be had passed away.

Tropes associated with PM Dawn include: