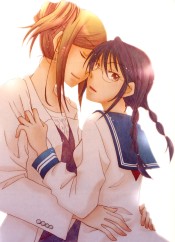 Junsui Adolescence is a Girls' Love manga dealing with a student who falls in love with a member of the faculty. It spans one volume and was originally serialized in the Girls' Love anthology Yuri Hime.

Nanao is an average high school girl who happens to be in love with the school nurse. Matsumoto is an average school nurse who happens to be in love with her medical assistant Nanao. Hilarity and drama ensues as the two go about their romance surprisingly unbothered by the legal system. They are not the only two to be romantically involved this story. There's another set of school girls and a gym teacher named Hanada who had a fling with her music teacher back when she went to school. Hilarity and drama follow them as well.