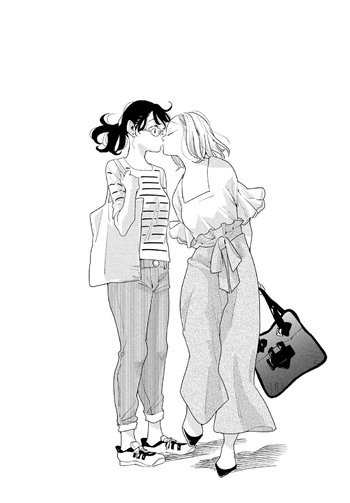 "Aah. God, if I'm dreaming, don't let me wake up."
"I must still be dreaming right.
But Midori writing a surname I've never heard before as her own,
starting a family with someone I don't even really know-
I feel like I'm back in the real world for those little moments."

Kakeochi girl (or it's alternative title, " Run away with me, Girl.") is a josei drama manga in the Yuri Genre by Battan

. The manga contains 16 chapters in total.The story follows Maki and her reunion with Midori, a woman that she (and her) were in love, back in their highschool days. They went their seperate way right after graduation and haven't met again since then. After 10 years has passed, Maki met Midori by chance and finds that her feelings for her hasn't changed since her highschool days.But after she realised that, she finds out that Midori's feeling has changed from a single letter that Midori gives to her.

There is no official English translation of the manga currently available at the moment but there is a well-made scanlation done by the team: Sexy Akiba Detectives

. All of the chapters are completely translated thus far